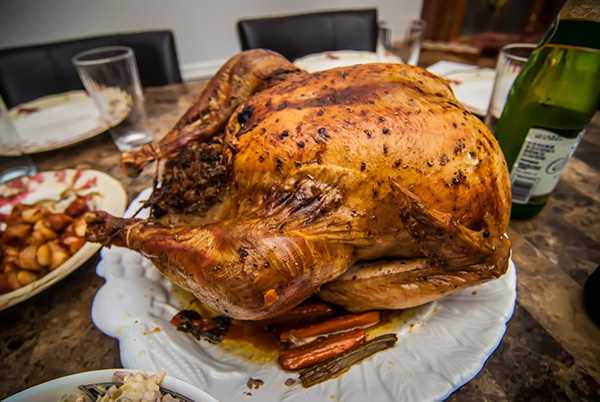 It’s the flavorful fowl. The appetizing avian. The enticing entree. The beautifully baked big bird on everyone's mind this season: The Thanksgiving Turkey.

Now, I have a confession to make: for most of my life, I was not a fan of Thanksgiving turkey. Hear me out. Imagine you're a young, impressionable six year old boy in ye olden times we know today as “The mid 90s”. Cell phones look like bricks so everyone uses beepers which look like smaller bricks. Every personal computer everywhere is beige. Unsupervised children  pelt each other with pine cones until the street lights turn on. You can show up at someone’s house completely unannounced and they’ll still feed you. And everyone, including your grandparents, wears neon.

Government issue sunglasses were worn to protect citizens from all the neon.

During this time, for some reason, the only meat ever available in my house is turkey. This is the heavily processed, mid 90s quality turkey. The flavor, like most things in the 90s, is tolerable at best. But a boy can only eat the same turkey hot dogs for so long. I put my sock and sandal clad foot down, and refuse to partake in any meal featuring the bird. So the next meal comes around, and my parents say to me “Don’t worry, it’s chicken” …  My 6 year old body was too compact a capsule to contain the copious choler cascading from the deepest crevices in my soul the moment I tasted their chicken and found it to be more turkey. It ruined chicken for me.

I don’t blame them. My parents’ judgement, like everyone’s in the 90s,  was impaired by all the bright colors. In fact, I know they too were tired of eating turkey all the time. It was years before we bought any kind of turkey again in my house. For thanksgiving, we’d either only eat cheap catered turkey slices they give out at school and church events, or we’d make a beef dish.

Flash forward to 2010. Spain’s men’s national soccer team has defeated the the vuvuzelas for the FIFA World Cup. The Old Spice guy is on a horse. Keanu Reeves is sad. Every guy in middle school looks like Justin Bieber, and my dad has been gifted a turkey for Thanksgiving.

At this point in our turkey journey, my family has already been to this crossroads a few times. We’ve bought turkey. We’ve made stuffing. We’ve unenthusiastically crammed about a quarter of it down our gullets and let the rest spoil in our fridge. It’s hard to make something to taste good when you’ve already decided it was gonna be alright at best.

But this year is different. This year my sister and I learned to communicate with each other like civilized human beings. Sure it was only for 15 seconds on a Tuesday in May, but it was monumental nonetheless. Anything is possible this year! The atmosphere is absolutely electrifying, and my dad can feel it. This is his year to try something crazy.

My dad plops the cold raw bird on our kitchen table, and with a glint in his eye he proudly announces that this will be the year we fry the turkey.

The earth shakes. Lightning cracks across the sky. The dead rise from their graves. My dog hides under the shed despite having a perfectly good igloo shaped dog house. It’s madness! We are going to ‘fry’ the turkey? But then, a moment of calm as a lone universal realization enters our minds: deep frying makes everything taste better. Perhaps my father is on to something.

We’ve heard tales of turkey being dipped in molten golden liquid, but we have no idea how to go about it ourselves. Turns out it’s remarkably straightforward. They even make kits for this. Seriously, take a moment to think of the logistics of deep frying a turkey. You need a big turkey-sized pot, maybe a basket of sorts to lower and raise the turkey, a lot of oil, and a source of heat. BEHOLD:

Capitalism at its finest

Ok so, we have the fryer and oil. Surely there's some complicated and time consuming marinating process, maybe a magic incantation or sorts needed to prepare this holy bird. Nah. You get the oil to about 350° F, gently lower the thawed turkey into it, and let it cook for about 3 minutes per pound. Sure, you can and probably should rub the turkey down with spices to boost its confidence, and you’d need to use a thermometer to make sure the Turkey breast has reached at least 151° F before taking it out and letting it rest.

So how's the taste? Well, as we have previously established: deep frying makes everything better. Turkey is no exception. What was once a dry and tasteless fowl becomes a juicy and flavorful bird. Imagine good fried chicken, but it’s turkey and you made it yourself. It’s like watching Star Wars for the first time. The concept is interesting, sure, but you’re just not ready for how life changing the experience is. We ate the whole thing. No one could walk afterwards, we just rolled ourselves to the couch.

I said gently lower the thawed turkey into the oil.

If you want to try something with a little more prep than what we did, here’s a recipe from Food Network. It’s from celebrity chef Alton Brown, so you know the payoff is gonna be good. As for my family, we roast the ham, but we always fry the turkey.